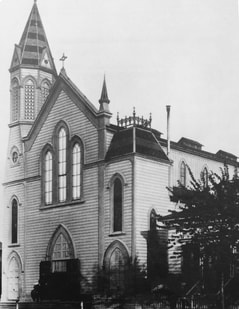 The founders of St. Paul’s began organizing their parish in 1861. City growth would divide the single parish of Old St. John’s at Broadway, with everything east of Broadway belonging to the new St. Paul’s parish. They began with Sunday schools, when in 1861, 50% of children in Alameda County were not in school and child labor was legal.  Chinese children were not allowed to attend public schools, so church members organized classes for all children, and volunteered to teach Chinese children at the Good Samaritan Mission downtown.

In 1864, the founders bought property, a chapel, and rectory, from the fledgling College of California at 12th and Webster Streets, as the college was moving to the country to become the University of California. As Oakland grew, the wooden church was literally picked up and moved twice up town.

In 1887, St. Paul's was located on the corner of Harrison Street and 14th Street, with Rev. Hobart Chetwood as the rector.

In 1912, they built the present English Gothic Revival-style building across from Lakeside Park, at the corner of Montecito and Bay Place. Designed by noted architect Benjamin Geer McDougall, the cornerstone was laid on January 25, 1912, and dedicated with great ceremony upon opening.

From it’s inception, St.  Paul’s members  have  actively served the community and the world. Through earthquakes, fires, epidemics and wars St. Paul’s was there to help. We served refugees from the 1906 earthquake and fires, who fled to the East Bay. We have clothed, fed, housed, and educated refugees from Poland, El Salvador, Cambodia, and Ethiopia, and in the 1980s were known as the "United Nations parish" of the Diocese.

In 1966, Clausen House was begun; a residential facility for adults with developmental disabilities. 1966 also marked the founding of the Episcopal Homes Foundation (now Episcopal Senior Communities), with the opening of St. Paul’s Towers, a Life Care senior residence, located across the street on Montecito.

Our Senior Food Co-op founded in 1980, has grown to feed seniors all over the Bay Area, and still provides fresh produce at cost to senior citizens and the disabled in the neighborhood every Thursday morning in the Parish Hall.  Senior Resources provides outreach services to frail elders in Alameda, Contra Costa, Marin, Monterey, San Francisco, Santa Clara, and Sonoma Counties.

The year 1989 signaled the beginning of a deeply challenging and tumultuous decade for St. Paul’s. In the summer of 1989, St. Paul’s twelfth rector, The Rev. Donald W. Seaton (1974-1991), was diagnosed with lung cancer. Months later, the entire Bay Area was rocked by the Loma Prieta earthquake. The quake closed the Bay Bridge, flattened sections of freeway, devastated large portions of downtown Oakland, and affected neighborhoods all over the Bay Area. Although the church suffered only minor damage from the quake and its aftershocks, the church and parish office buildings (along with 300 other buildings in Oakland) were subject to the City’s newly formed requirements for seismic strengthening. Faced with the choice of “retrofit or close,” the church began a nine year process of working with engineers and architects, City personnel, fundraisers, the community, and contractors.

During this time, Fr. Seaton retired, and an associate priest and two interim rectors served during a rector search. The successful conclusion of the search came with the call of the Rev. Dr. John H. Eastwood. Work on the seismic retrofit proceeded, with the rejection of an unsatisfactory engineering proposal, and the eventual development of a more acceptable plan. The congregation rallied again and undertook a major fundraising effort to finance the repairs. A capital campaign brought forth significant support from the parish, St. Paul’s Episcopal School, the Diocese, local foundations, and others in the community. During the process, the building was declared a historic landmark by the City of Oakland, Oakland Landmark #116, under Zoning Case #LM 92-200 - an honor the parish still holds dear. The retrofit was completed in 1998 at a cost of $1.8 million. Bishop William Swing led the Service of Re-dedication of church and parish buildings, on April 26, 1998.

During the 1990s, St. Paul's Church became involved in faith-based community organizing, becoming a member of the Oakland Coalition of Congregations. Through annual and biennial gatherings, the parish contributed to services of improvement in the Oakland community. In 1994, when a Muslim mosque was bombed in the Holy Land, leaders of the interfaith groups in the city came together for an interfaith community service at St. Paul’s to celebrate solidarity and mourn the deaths that resulted from that tragedy.

In 2001, St. Paul’s began a two-year process of reflection and education to become a covenant congregation of Oasis, a Diocesan program that helps parishes, “through their own processes of conversation, conversion, and communion to become truly inclusive of lesbians and gay men of all ages.” This involved work by the Vestry and a Committee on Christian Inclusion, a series of parish-wide presentations and discussions during Lent. In 2002, the church adopted a formalized Statement of Inclusion.

In 2002, the parish resurrected the Friends of Music, a group of parishioners who seek to further the mission of St. Paul’s Episcopal Church by enhancing music for worship, and opening our doors to the greater community through music performances. Music groups that perform at St. Paul’s help the Friends of Music raise money that benefits music for the liturgy, funding professional singers at weekly services and musicians for special feast days.

The service of Compline, "prayers for the end of the day,"  is sung on the fourth Sunday of every month, was started by St. Paul's Choir in Fall, 2002. In 2005, Pacific Collegium was designated Artist-in-Residence at St. Paul’s. This group specializes in performance of liturgical music in sacred settings, in worship services and concerts. The service of Evensong, initiated in 2006, is sung by Chapel College Men & Boys Ensemble, a program of Pacific Collegium Conservatory.

During the last decade, much has happened in the world, in the Bay Area, in Oakland, in the neighborhood, and at St. Paul's. We are very alive and well and have more history and recent news to share and tell.

Coming soon ... thank you for your patience!