​A History of Organs at St. Paul's 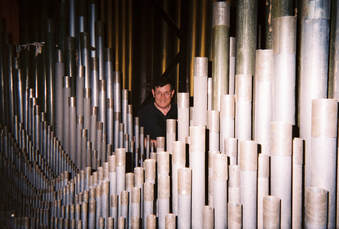 This article was drafted in response to requests by parishioners of St. Paul’s and others that have an interest in Opus 1862, built by Austin Organs in 1934 and installed with much celebration. Major organists of the day, including the famous Parisian organist and composer Marcel Dupré, were invited to demonstrate their skills upon the organ, and there are documents on file congratulating the parish for the choice of this builder, and the resulting pipe organ. But first, here is a little bit of St. Paul’s music history.

The first organ in St. Paul’s Church, for which I have found documentation, was the Whalley & Genung instrument installed in 1889 in a previous church building. This organ was controversial in that it was designed and agreed on without the advice or counsel of the organist at that time, Mr. W. J. Macdougall. He was so upset with the proceedings that he left his post and refused to play the new organ. It seems that, in his opinion at least, it was compromised by the use of certain shortcuts in design and construction that were not unusual for less expensive organs of that era.

For example, rather than provide separate bass pipes for each rank (or set) or pipes, two ranks would be designed to share a bottom octave of pipes, such as the Great manual 8’ Open Diapason and 8’ Stopped Flute. This worked all right up to a point, but the transition below tenor C from one rank to another can be unsettling to the ear. There is an example of this effect in the small Moller organ currently in the back of the church, where the Diapason shares bass pipes with two other ranks. There was another Whalley & Genung, or perhaps a rebuild and enlargement of the old organ, that eventually made its way into the organ chamber of the new church at Grand and Montecito that was built in 1912.

I had the pleasure of talking with two old boy acolytes during a funeral for which I played several years ago. They hadn’t been in St. Paul’s for many years, and described their memories of the old organ, which the organist approached by crawling up through the scuttle from the Working Sacristy. This organ was advertised about and finally found its way into another Episcopal church on the Peninsula, although which one is uncertain, since the records I have are so incomplete.

The new Austin was installed in late 1934 after much fund-raising and arm-twisting by the rector and organ committee of the time. Austin won the contract in the end, but not without some competition from the other most serious contender, the Kimball Organ Company of Chicago. Austin had the artistic edge, though, because of their association with James B. Jameson who was promoting his newly configured Diapason Chorus. This innovation is not a new thing today, nor was it in the more distant past, but in the 1930’s it was very unusual because of its inclusion of upper pitches and mixtures that provided a clarity and brilliance not common in American organ design during the previous fifty or so years. The Kimball specification was more conventional and very typical of the current American style, while Mr. Jamesons’s Austin design reflected the “English cathedral style” which he had admired while traveling in England and Europe. Jameson designed nearly identical organs for the Estey company before he left to go to Austins. One of these, Opus 3017, was installed in a Methodist church in Pennsylvania in 1932. This was significant for St. Paul’s organ, as we shall shortly see.

It is an unfortunate fact of history that changing taste in organ sound was to wreak havoc with many of the fabulous and magnificent organs built by such giants as Ernest Skinner and the Austins, when the majestic voices of these instruments were declared incapable of playing the music of Bach and his predecessors. The Diapason choruses of the organs like the Skinner at Trinity Church, San Francisco, and St. Paul’s very complete chorus of 16’ 8’ 8’ 4’ 2 2/3’ 2’ and two mixtures, supposedly lacked the brilliance and articulation that seemed so necessary for baroque music, so of course they had to be changed or thrown out! This happened to St. Paul’s Austin when it was “updated” with poorly constructed pipework purchased off the shelf from a German supply house. Many of the original pipes were unceremoniously dumped in the dustbin, as recalled by a parishioner contemporary with these events. The resulting lack of balance in the St. Paul’s main Diapason Chorus took a nearly miraculous stroke of luck to correct! As it turns out, the Estey organ from that Methodist church in Pennsylvania was disassembled and sold off bit by bit, and we were able to replace the original diapason chorus’ lost pipe-work with pipes identical in scale and voicing to the lost originals, and from the same designer and voicer! It was a revelation to hear the “new” pipes after they were installed. The Great division of the organ was now in balance again, both with itself and the rest of the organ. The seemingly out-of-place and odd-sounding 16’ Double Diapason left in the organ from the original chorus which really DID make the organ sound “muddy”, now sat nicely under the grand Large Open Diapason 8’ and the rest of the chorus. St. Paul’s organ also had other indignities visited upon it, for example with the strings in the Swell division, which were cut off at the top to make the tone “warmer”, but which rendered them very difficult to keep in tune. It is unclear to me whether these are even the original Salicional and Voix Celeste from 1934, since Jameson’s notes specify strings with “broad” tone, and the current pipes are rather thin and reedy in tone. This may be another good avenue for investigation!
​
It is a current fact of life for parishes like St. Paul’s, that changes in demographics and a general decline in traditional spirituality have left a magnificent neo-gothic building with its organ and other fine appointments with less than the funding base they really need to be maintained adequately. St. Paul’s is seeing a resurgence in public interest, in part due to its offering of traditional services like Compline and Choral Evensong that feature organ music throughout the service. Interest in these services, together with the efforts of parishioners and others who love St. Paul’s and its organ, offer hope that gradually the repairs will be made so that people will continue to be able to appreciate organ music and find spiritual inspiration through it for years to come at St. Paul’s.